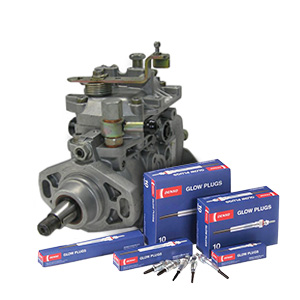 Diesel engines combine excellent fuel economy and power, and their popularity is growing, especially in Australia.

DENSO launched the world’s first common rail system in 1995 and since then has been actively involved in developing advanced diesel engine technologies to meet customer needs as well as stringent worldwide emission regulations.

DENSO leads the industry in increasing fuel pressure and maximizing the precision of injection timing and quantity, achieving cleaner emissions and more powerful engines.
DENSO’s common rail systems are supplied to a variety of vehicles including passenger cars and commercial vehicles.

The DENSO diesel fuel injection pumps commonly used in Australia for new vehicles at present are the ECD-v3 and ECD-v4:

These distributor-type pumps were developed in response to the demand for lighter, more compact pumps for the smaller car engines now available. This type of pump injects and distributes the fuel into each cylinder with one rotation of the plunger. Features of the ECD-V3 include the control of the fuel injection volume by the Solenoid Spill Valve (SPV), and the control of the fuel injection timing by the Timing Control Valve (TCV).

While the ECD-V3 and mechanical-type pumps use a face cam mechanism for fuel plunging, the ECD-V4 uses an inner cam mechanism to achieve the desired injection pressure of approximately 130Mpa. The rollers revolve in the inner circumference of the cam ring, creating a reciprocal movement of the plungers and generating high pressure.

The in-line fuel injection pump has the same number of fuel pressure mechanisms (elements) as engine cylinders. This type of pump, including the governor, timer and feed pump on the pump’s body, is mainly used for medium and large trucks and construction machinery. The pump body is equipped with fuel pressure/feed mechanisms and injection quantity control mechanisms driven by a camshaft. The elements in the pump body feed fuel to each engine cylinder according to the injection order.

The distributor injection pump has only one fuel pressure mechanism, irrespective of the number of engine cylinders. Instead, it has a distributor designed to distribute the pressurized fuel to each cylinder according to the injection order. All the components, including the governor, timer and feed pump, are built into the pump housing. The small, light pump can operate at high speeds – making it ideal for small engines.